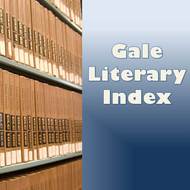 Use this online index to identify entries for your authors and their works in the various titles in Gale's Literary Criticism series.

Notice that the original critical essay written by John Kelson on Anton Chekhov’s play, “The Cherry Orchard” appeared in Western Humanities Review in 1959. However, since you did not have the original essay, but rather read part of the essay in Twentieth-Century Literary Criticism, you must include that information in your citation.

GALE LITERARY INDEX is the best place to start as it guides you to finding excerpts and full reprints. This makes it easy to find critiques written by different critics collected in one place. The Index tells you in which volume to find the criticism.