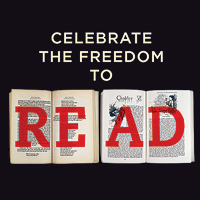 “Banned Books Week is set aside for the purpose of reminding people that there are times when books, and other media, can be disturbing and some people decide to remove the material from access of others as a reaction,” librarian Jean Caspers said in an email.

The American Library Association website states that the books typically featured in Banned Books Week have been banned or targets of attempted banning. The purpose of the event is to bring attention to the importance of intellectual freedom and the harms of censorship.

Most Challenged Books of 2016

Every year the American Library Association records hundreds of attempts by groups and individuals to remove books from schools and libraries. Groups try to ban books–get them off the shelves so they can’t be read–for a variety of reasons, some of the most popular reasons being “sexually explicit,” “offensive language,” and “unsuited to age group.”

Both new books and classics are challenged each year. Both “Brave New World” and “To Kill a Mockingbird,” English class staples, made the 2011 most frequently challenged book list alongside the Hunger Games series, The TTYL series, and many others. Most of the books are kidlit/YA lit or books teens read in school.

What's the difference between a challenge and a banning?

A challenge is an attempt to remove or restrict materials, based upon the objections of a person or group. A banning is the removal of those materials. Challenges do not simply involve a person expressing a point of view; rather, they are an attempt to remove material from the curriculum or library, thereby restricting the access of others.

Books usually are challenged with the best intentions—to protect others, frequently children, from difficult ideas and information. Although this is a commendable motivation, Free Access to Libraries for Minors states that “Librarians and governing bodies should maintain that parents—and only parents—have the right and the responsibility to restrict the access of their children—and only their children—to library resources.” Censorship by librarians of constitutionally protected speech, whether for protection or for any other reason, violates the First Amendment.

As Supreme Court Justice William J. Brennan, Jr., in Texas v. Johnson , said most eloquently: "If there is a bedrock principle underlying the First Amendment, it is that the government may not prohibit the expression of an idea simply because society finds the idea itself offensive or disagreeable."

Throughout history, different kinds of people and groups of all persuasions, for all sorts of reasons, have attempted—and continue to attempt—to suppress anything that conflicts with or anyone who disagrees with their own beliefs. In his book Free Speech for Me—But Not for Thee: How the American Left and Right Relentlessly Censor Each Other, Nat Hentoff writes that “the lust to suppress can come from any direction.” He quotes Phil Kerby, a former editor of the Los Angeles Times, as saying, “Censorship is the strongest drive in human nature; sex is a weak second.”

According to the Challenges by Year, Reason, Initiator, & Institution 1990-2010, parents challenge materials more often than any other group.

Reprinted with changes from: http://www.ala.org/ala/issuesadvocacy/banned/aboutbannedbooks/index.cfm